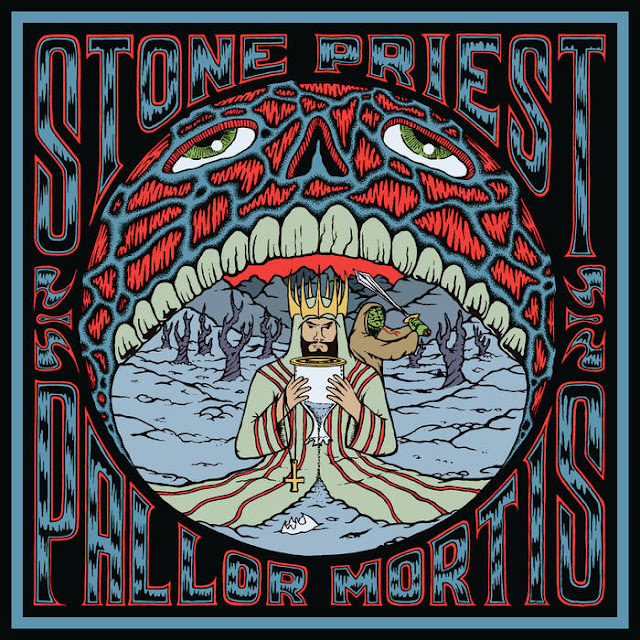 Over the last couple of years there has been a resurgence of progressive elements infiltrating the realms of heavy rock and metal,even reaching out through the toxic atmospheres of doom, black and death metal adding new dimensions to a genre that seemed lost and generally forgotten. STONE PRIEST however has reached back in time and dragged the very best progressive sounds of the late 60's and 70's back into the fore.

'Pallor Mortis' is multi layered with unashamed use of keyboards high in the mix and an analog feel to the recording giving the album an authentic sound, I could imagine the US Marine Corps listening to this, particularly the track 'Ash To Dust, somewhere along the Mekong Delta. I'm not usually a fan of the use of keys in a recording, it's the knuckledragger in me unfortunately, but STONE PRIEST has cleverly given them prominence in several different ways from ivory tinkling to something John Paul Jones or Rick Wakeman would use. The best prog should be jaunty, never standing still or sounding the same and STONE PRIEST has encapsulated this, guitars and keyboards vying for prominence weaving in and out among the vocals.

When I took the left hand path in the early  70's listening to Black Sabbath, bands like Uriah Heep, Yes and their ilk were abandoned for the heavier, doomy riff, but with 'Pallor Mortis' STONE PRIEST has kept true to the old traditions but shaken them up with a modern heavy rock guitar sound and I'm sure that back in the day, if this album was available then, I would have been a lot less narrow minded!

The album is available digitally, but will be available in good old heavy vinyl on 30th November 2019 here https://helmetladyrecords.bigcartel.com/