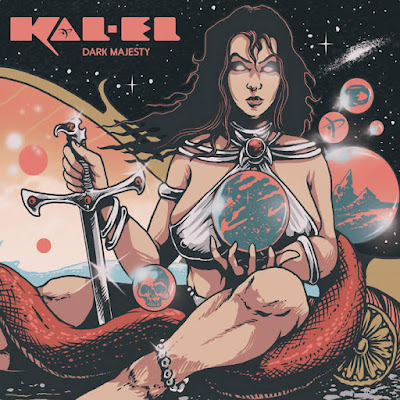 Damn Kal-El, damn their eyes! I really wanted to appear kvlt and not include their latest album 'Dark Majesty' in my top five album releases for August unlike so many of my peers, but however much I resisted (And I listened to a LOT of albums, my shortlist numbered just over 80), I had no option but to return to 'Dark Majesty' and place it at the pinnacle of August releases.
Sure, there were a couple of albums that contained exceptional tracks that were superior to anything on 'Dark Majesty' but the crux of the matter is, containing an exceptional song does not make a great album, especially when compared to one which can be described as stellar from the first track to the last.
Lets face it, stoner doom albums are ten a penny, it takes a special album for a band to rise above the others and be noticed. Kal-El has done it by adding an ingredient I haven't come across too often in the doom genre, a sense of elation. It's the harmonies that do it for me, it's really magical the way the soaring vocals hitch a ride on some of the smoothest yet heaviest stoner doom riffs ever laid before the Sabbathian altar. Elephant Tree  touched on it with their track 'Bird,' but that's one track in a fantastic album in its own right, Dark Majesty is chock full of 'Bird's.'
Releasing such a fine album does, of course, present Kal-El with a problem, albeit a nice one.....how are they going to better this?
at September 13, 2021