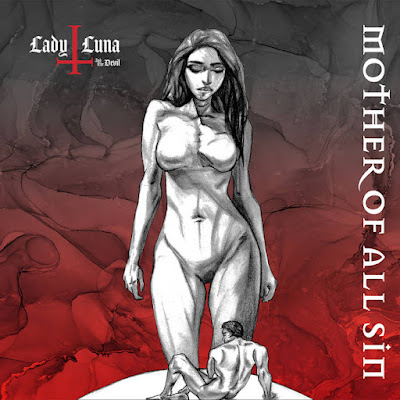 Gather round all ye sinners and behold the sermon delivered from the pulpit of doom by Detroit band Lady Luna And The Devil who's debut album Mother of All Sin will be released 10/12/21 on Bandcamp through The Swamp Records.

Bravely, Lady Luna and the Devil has released Mother of all Sin as a concept album, an opera subverting the Book of Genesis chronicling Eve's journey to liberate herself from Paradise via the Seven Deadly Sins and it works in a rather clever way because it also gives the impression of someone wrestling with their conscience. Listen to the album wearing headphones and you have the sweet, dulcet tones of vocalist Lady Luna on one shoulder and the sound of temptation with the minimalist, earliest Candlemass like riffing of guitarist The Devil on the other, goaded by warlike percussion from drummer, Hand of Doom.

Mother of  All Sin is a no frills album. Its simplicity is explained by guitarist,The Devils' influences which includes the album 'Monotheist' and the band Triptykon. It sounds surprisingly grim, shoegaze in parts but is finely balanced by the clarity and range of Lady Luna's vocals.

The bands bio states that The Devil only started to really get into playing the guitar during Covid, so it will be really interesting to hear how the band progresses and further defines its sound but, until then, Mother of All Sin is a solid foundation and an interesting take on how to further embrace the bond between heavy doom and clean, feminine vocals.