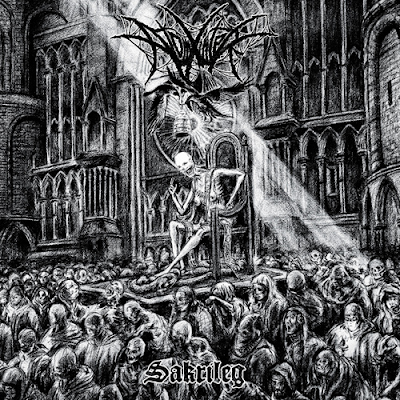 I've just finished listening to Sakrileg the new album by Germany's Atomwinter so bear with me, I just need to scrub myself down with bleach and a wire brush before I resume putting down my thoughts on the album.........!

A bit of background on the band's catalogue so far. Their first album 'Atomic Death Metal' was released in 2012 and does exactly what the album title says playing straight ahead death metal of a particularly brutal kind. 'Iron Flesh' crawled into existence three years later keeping the brutality cranked to maximum pain thresholds but this time with a layer of crusty doom/death. 'Catacombs' followed in 2018 and was much the same but this time Atomwinter wanted to not only crush us but asphyxiate the last ounce of breath from our broken bodies with a thicker, poisonous mix.

Which leads me onto the new album Sakrileg.

It's the same crusty doom/death grisliness but this time it's all about the death metal riff. Brutality and filth still prevails but Sakrileg is the fastest album the band has yet written despite being weighed down with pustules and scabs.

This album will make even the leprous headbang.